Its 20 years since FT first came to London and was introduced by gay fashionista friends to Soho and its vibrant and inspiring community.  Since then, she has spent time with many of its inhabitants.   She has relished in the fun, free thinking and creative world of Gay London and has made many friends here.

Having done makeup for over 15 years now; Fiona has performed makeup on many faces including Drag Queens and Kings, Transvestites, Transsexuals and creations for many exuberant and interesting characters.

Pride in London (formally known as Pride London) is an annual LGBT pride festival and parade held each summer in London, the Capital of the United Kingdom. It is one of the longest running in the country and attracts an estimated one million visitors to the city. The festival’s events and location within London vary every year however the Pride parade is the only annual event to close London’s iconic Oxford Street. London’s 2015 Gay Pride Parade through the streets of London attracted 1 million people making it the 7th largest gay event in the world and the largest Gay Pride Parade and Gay event ever held in the UK. 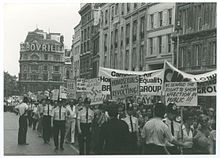 Pride has been organised by several organisations since the first official UK Gay Pride Rallywhich was held in London on 1 July 1972 (chosen as the nearest Saturday to the anniversary of the Stonewall riots of 1969) with approximately 2,000 participants.[2][3] The first marches took place in November 1970 with 150 men walking through Highbury Fields in North London.[4] The controversy of Section 28 from 1988 led to numbers increasing on the march in protest. In 1983 the march was renamed “Lesbian and Gay Pride” and in the 1990s became more of a carnival event. There were large park gatherings and a fair after the marches up until 2003.[4]

‘Pride London’ was formed in 2004. Since 2004 a political rally in Trafalgar Square has been held straight after the parade, and more recently Pride London has organised several other events in the centre of London on Pride Day including in 2006 ‘Drag Idol’ in Leicester Square, a women’s stage in Soho and a party in Soho Square. In 1992 London was selected to hold the first Europride with attendance put at 100,000,[5] London again held Europride in 2006 with an estimated 600,000 participants. In 2004 it was awarded registered charity status. The 2012 event was World Pride.,[6] though this was to be the last event organised by Pride London.

In late 2012, a group of individuals from within the LGBTQ community formed London LGBT+ Community Pride, a registered community interest company, and the company organised the Pride in London festival and parade in 2013. The organisation has been awarded a contract to organise Pride in London for five years by the Greater London Authority, together with funding of £500,000 over five years. The former Mayor of London, Boris Johnson has been a vocal supporter of Pride in London.

Large numbers of LGBT-friendly people (including a significant number of family, friends and supporters) from all walks of life take part in the March. Since 1991, the Friends of Dorothy Society of Change Ringers have rung the bells of the church of St Martin in the Fields in Trafalgar Square during the morning of Pride, and as the March passes through. For many the most iconic image is of a long rainbow flag, in 2006 this was carried by members of the Metro Centre. In 2010 it was jointly carried by EDF Energy and Tesco’s staff network groups. After an absence in 2013, the long flag was set to return in 2014.

Since 2006 Regent Street and Oxford Street have been closed off to allow the March to pass through. This is seen by many in the LGBT community as a sign of wider acceptance, although the March once routed down Oxford Street illegally in protest in the 1980s. 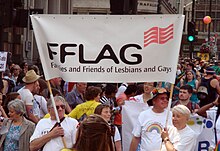 London LGBT+ Community Pride was formed in August 2012 as a Community Interest Company (CIC) to deliver Pride in London. It was founded as such so that any surplus generated can only be reinvested in Pride in London events or distributed as grants to LGBT+ community groups. Alison Camps and Michael Salter-Church are the current Co-Chairs along with 6 other Board members

In addition to the Board, the organisation has a Community Advisory Board which was established as an advisory and scrutiny body to help meet its commitment to openness and transparency, to advise on questions of inclusivity and to act as a source of guidance on governance and operational issues that may arise.